Many ISPs set special queues on top to bypass the subscribers queues. Mostly those queues address the cached and peered traffic such as: GGC (youtube & google play), Akamai, Netflix, etc.

As a result, the consumption graphs

omit those types of traffic.

However, ISPs need to see the full consumption graphs

especially when they sell shared plans with monthly limits. Because they need to share with their subscribers the total consumption graphs and not just the real traffic.

To solve this problem, ZIMA now reads the consumption graphs from the PPP interface instead of the simple queues. The PPP interface tracks all the traffic that passes through it including the cache and peering traffic.

Example of a special queue 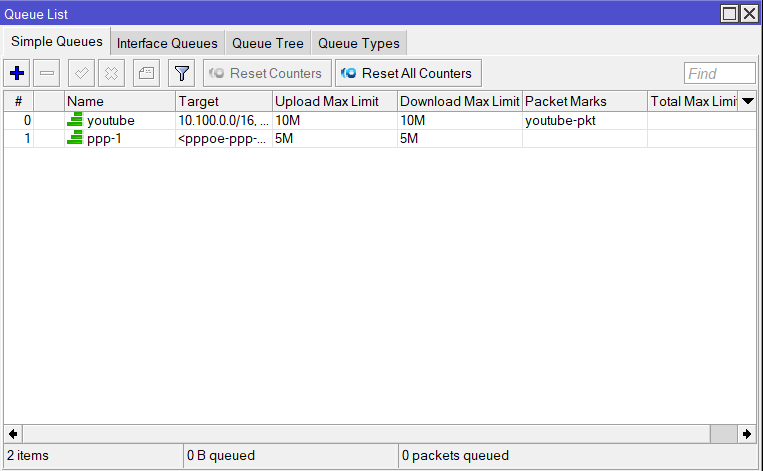 Comparison between the old method & the new method

We compare the graphs before and after the release.

Now the graphs are not affected anymore by special queues in Mikrotik because they are being read from the interfaces. As a result, some ISPs are able to share those graphs again with their subscribers as they reflect their full consumption and do not exclude the cached traffic anymore.

Previously the daily and monthly thresholds were based on real traffic and not total consumption. Now they could be readjusted to account for the full consumption which makes the bandwidth management more predictable and easier to implement.

3. No change in traffic speeds

This release only affects the the traffic accounting and not your traffic speeds. In other words, your queues configuration remains the same on mikrotik, no changes.

4. The case of no special queues

Some ISPs do not have special queues adapted for cached services such as youtube, netflix etc.
Those ISPs will not notice any difference after this release.